What information did Joe encounter during his investigation into the history and details of federal taxation as well as the day to day and inner workings of the Internal Revenue Service and why did the information lead to his resignation from his IRS special agent (criminal investigator) position?  First, a brief summary of his background will be provided, then a few samples of the information he encountered during his investigation will be provided and lastly a summary of the conclusions Joe has formulated for you to review and verify for yourself. This presentation is not meant in any way whatsoever to be a sales pitch urging you to engage in a one on one battle with the IRS or to stop complying with the agency's demands. Rather, this presentation is meant to provide the American people with incontrovertible facts and evidence that will lead the average American (1) to question whether the government and the media and academia have told the American people the truth about the origin, administration and enforcement of the federal income tax system and (2) to decide how "We, The People" will work together to end this grave danger to our constitutional republic. 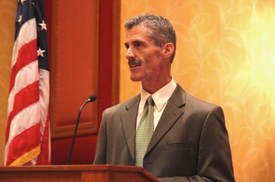 During Joe’s IRS criminal investigator training, he was elected president of his Criminal Investigator Training Program ("CI") and Special Agent Basic Training ("SABT") law enforcement training classes, received “Academic” and “Expert Marksman” awards during that training and was asked to address his classmates at graduation.
supervisors, they instead refused to answer him and encouraged him to resign. Joe did resign from the IRS on February 25th, 1999 after delivering a blistering resignation letter addressed to the IRS Commissioner. The IRS and the U.S. Department of Justice retaliated against Joe in several ways but the most egregious attack was orchestrating a federal indictment criminally charging Joe with 4 federal felonies. The indictment had a devastating impact on his family and caused great strain and suspicion in the Banister family's network of friends, parishioners and acquaintances, so much so that Joe felt compelled to write a letter to the parents of his younger son's elementary school classmates. Joe and the defense team he assembled knew the charges were bogus but nevertheless federal prosecutors are notorious for getting convictions regardless of the merits of their case. After an incredible court battle at the federal courthouse in Sacramento, California, Joe was deservedly acquitted of all charges. Even jurors who were interviewed after the trial expressed incredulity that federal prosecutors would even bring such a case to trial, that the focus of the case was Joe's credibility and belief in the truthfulness of his actions and said they didn't find any dishonesty or deceitfulness in Joe's conduct as portrayed in the prosecution's case. One juror commented, "I looked at the case and asked myself, what the hell is going on here - there's no case!" and the other commented "I think the government's evidence actually worked against them." Why is the federal government so driven to discredit and silence Joe, even to the point of bringing bogus criminal charges against him? Read on for a summary of facts the federal government would prefer the American people never learn.

Internal IRS Manuals Expose The Deceit - Internal IRS charts and department explanations reveal an interesting chain of command for typical IRS departments having contact with the public. Why is IRS authority for Americans living and working abroad explicitly described yet silent on authority for Americans living and working in the Unites States Of America? Learn more about this topic here.

Federal Law Does Not Make The Average American Liable For The Federal Income Tax - Federal tax laws follow a distinctive pattern: a tax is imposed and a person is designated as the responsible party to pay the tax that is imposed. Being designated in the law as the person responsible for paying a particular tax imposed is called being made liable for the tax. This dual tax imposition and tax liability pattern is followed over and over again in federal tax law, yet ordinary Americans living and working in the United States of America have never been made liable for the federal income tax. What is the reason, then, that in the more than 100 years since the 16th Amendment was conceived, Congress has had plenty of time and opportunity to pass a law and send it to the President's desk making the average American living and working in the United States liable to pay the federal income tax and yet no such law is found in the Internal Revenue Code? If being liable for the federal income tax is not is not a critical legal component of owing the federal income tax, why has the IRS made sure to state in the Form 1040 Instruction booklet and elsewhere since the 1970s that Americans must file a return or statement with the IRS for “any tax you are liable for”? Learn more about this topic here.
​
The American People Have Been Deceived As To What "Income" Is - The U.S. Supreme Court has ruled dozens of times that the term “income” has a specific constitutional meaning, which is quite different from the average American's understanding of the term "Income." Learn more about this topic here.
All pages on this site are copyrighted by Joseph Banister. All information regarding the Federal Income Tax is for informational and educational purposes only and should not be applied to your individual tax situation without doing your own independent research and consulting with your legal counsel and/or tax professional.