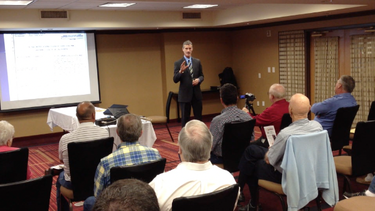 During some of the worst days of IRS persecution against Joe, when publicity of the agency's persecution efforts reached the local and national papers, he realized some of the teenagers in his younger son’s 8th grade class, as well as their parents, were wondering what all this “Joe vs. the IRS” discussion was about.  Joe prepared an explanatory letter with exhibits and mailed it to the household of each classmate’s parents in the hope of providing them with a little more background to the story.

The letter is very detailed and it provides a fairly comprehensive auto-biography of Joe's journey through life up to and including the criminal trial in June, 2005, where he was deservedly acquitted of the outrageous and false charges leveled against him.
Joe at an IRS Quarterly Firearms Training in San Jose, California, in 1997 (no sound).
Bogus Charges Brought Against Joe In Retaliation For His Whistle-blowing Against The IRS: The U.S. Department Of Justice prosecuted Joe based on bogus charges cooked up by the IRS. Joe was acquitted of the bogus charges after an enormous fight to restore his good name. A copy of the Jury's Verdict is here.

Here is a video of what some members of the jury said just after Joe was acquitted...

Here is an article written by the Banister trial juror on the left in the video above, Oscar S. Ramirez, Ph.D....

Dr. Ramirez' article is here.
All pages on this site are copyrighted by Joseph Banister. All information regarding the Federal Income Tax is for informational and educational purposes only and should not be applied to your individual tax situation without doing your own independent research and consulting with your legal counsel and/or tax professional.