Federal tax laws follow a distinctive pattern: a federal tax is imposed by a federal law passed by the U.S. Congress and signed by the U.S. President and a person is designated in the federal law as the responsible party to pay the federal tax that is imposed. Being designated in the law as the person responsible for paying a particular tax imposed is called being made liable for the tax. This dual tax imposition and tax liability pattern is followed over and over again in federal tax law. For example:

The only law specifying a liability for the federal income tax is found at section 1461 of the Internal Revenue Code. whereby every person required to deduct and withhold any tax under Chapter 3 of the Internal Revenue Code is made liable for such withheld tax. And from whom must such a tax be withheld? Such a tax must be withheld from nonresident aliens [section 1441], foreign corporations [section 1442], foreign tax-exempt organizations [section 1443], Virgin Islands Source income [section 1444], dispositions of United States real property interests nonresident aliens [section 1445] and foreign partners' share of effectively connected income [section 1446]. How many Americans have any financial dealings whatsoever concerning these types of circumstances? Obviously very few.
​What is the reason, then, that in the more than 100 years since the 16th Amendment was conceived, Congress has had plenty of time and opportunity to pass a law and send it to the President's desk making the average American liable to pay the federal income tax and yet no such law is found in the Internal Revenue Code? If being liable for the federal income tax is not is not a critical legal component of owing the federal income tax, why has the IRS made sure to state in the Form 1040 Instruction booklet and elsewhere since the 1970s that Americans must file a return or statement with the IRS for “any tax you are liable for”?

The Paperwork Reduction Act ("PRA") requires the IRS to specify the particular laws that require the public to submit certain specified information.  The IRS complies with the PRA by publishing the above-illustrated notice, which specifies what those who are made liable for payment of the income tax are required to do. The notice is routinely published in the Form 1040 instruction booklet every year. Below is a cropped excerpt of the laws the IRS itself specifies the public should use to determine what their federal tax obligations are and then below that is the entire page 107 of the 2021 Form 1040 Instruction booklet so you can see how these IRS guidelines are provided to the public: 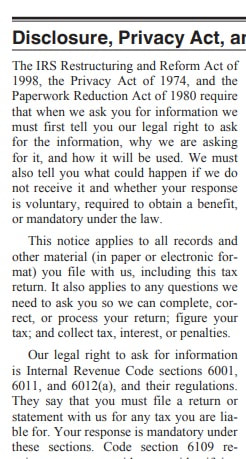 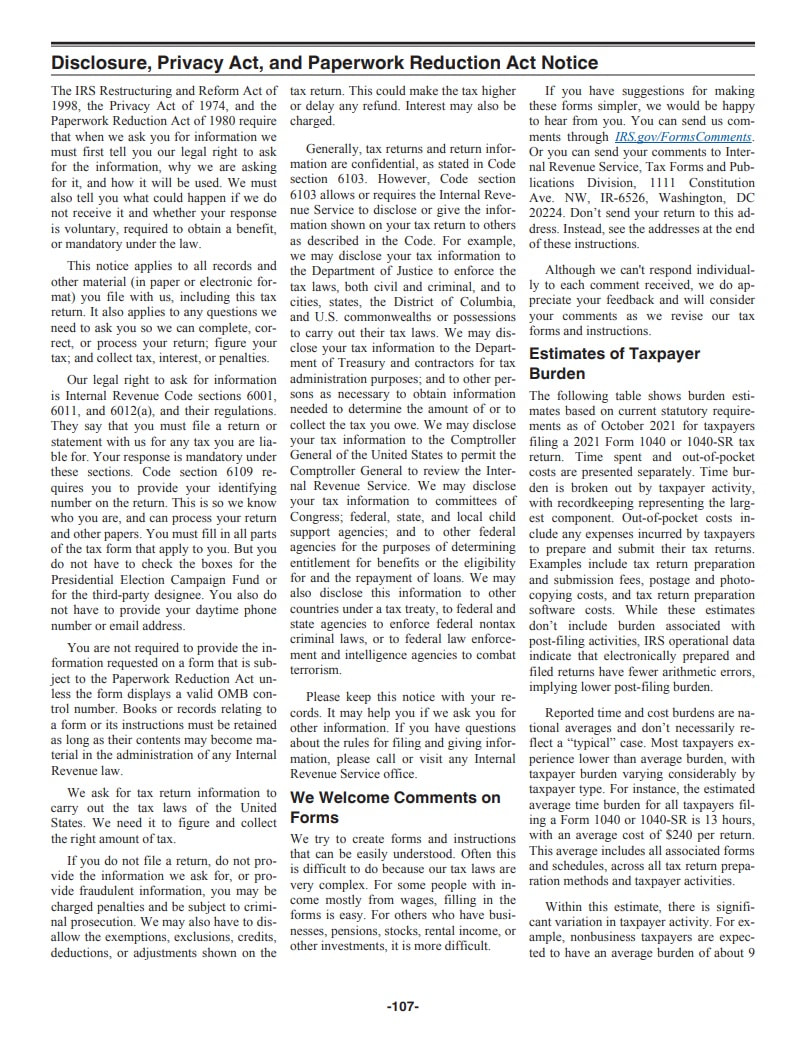 ​The wording of the above notice proves that the IRS knows very well that only those made liable for the federal income tax are required to pay it. Here are links to the three laws the IRS references in the notice above:

The regulations to these sections, known as the "Code of Federal Regulations," are more difficult to link to. However, here are some links to get you started:

Yet, as explained above, the average American is not engaged in the kind of activities specified in federal law (living, working abroad, dealing with non-resident aliens, foreign corporations, etc.) that would make them liable for the federal income tax. Is there any obligation to pay a tax for which no law has ever been passed making you liable to pay it? Obviously not, and federal courts have repeatedly said so. Taxation without representation is a horrible injustice but isn't taxation without legislation even worse?

The absence of any federal law making the average American living and working in the United States liable to pay the federal income tax and the presence of income tax liability laws surrounding foreign-oriented scenarios helps to explain why the IRS's internal procedure manuals (described and picture above) limited IRS income tax administration and enforcement to foreign and international matters. The IRS's own internal procedure manuals offer proof from inside the agency itself that the IRS has no business administering and enforcing the federal income tax laws against the average American living and working in the United States.
​
All pages on this site are copyrighted by Joseph Banister. All information regarding the Federal Income Tax is for informational and educational purposes only and should not be applied to your individual tax situation without doing your own independent research and consulting with your legal counsel and/or tax professional.